Public Policy Polling put up a brief note about this week's Virginia poll.
A couple early observations from the Virginia numbers:
-George Allen appears to be more popular than Barack Obama with the 2009 electorate.
-Creigh Deeds seems to be doing marginally better than a month ago but is still down by a good bit.
Their last poll had McDonnell up by 14. Sounds like an 11 or 12-point lead with nine weeks to go.
We'll see Tuesday.
Posted by Mike at 11:46 AM No comments:

In an email statement from Senator Mark Warner's Roanoke office, Drew Densmore, Outreach Representative, communicated that neither the senator nor a representative from his office would be coming to the Valley health care town hall event.

Mr. Densmore wrote, “I spoke with Jim Webb’s office today and they let me know Sen. Webb will not be attending the town hall. It is my understanding that there are no elected officials scheduled to attend. We wouldn’t be sending a representative in Sen. Warner’s place but instead to hear the audience address Sen. Webb. In light of this we regret to inform you we will have our representative elsewhere working with constituents.” Since when do you have to have another politician present to get our representatives to listen to us, are we not the employers of these representatives?

I regret to inform the Valley that their concerns and frustrations are well founded; their senate representatives are not listening. I am happy to announce that this Town Hall will be held and the Valley's voice will be heard in spite of the fact that our senators refuse to attend. I encourage all Valley residents to come on Sunday, September 6th to Riverheads High school at 6pm to speak their mind and write down their thoughts so their opinions can be delivered to our senators.

A Welcome Sign for Virginia Senators Webb and Warner. 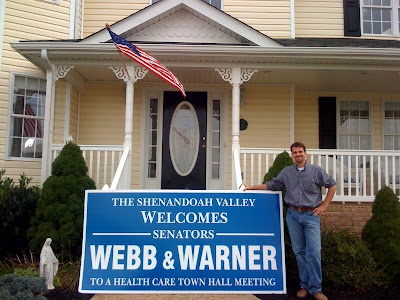 Public Policy Polling plans to poll Virginia this weekend. In their last poll released August 4, Bob McDonnell held a 14-point lead.
Posted by Mike at 8:36 AM No comments:

Orange County approved a Walmart Supercenter early Tuesday near one of the nation's most important Civil War battlefields...........
The Orange County Board of Supervisors voted 4-1 to grant the special permit to the world's biggest retailer.
See a post over at YankeePhil
See the full story here
Posted by Unknown at 11:34 AM No comments:

~Using own money to rent facility and advertise event~

His name is David Karaffa, he is 25 years old, and he is an Augusta County resident. He's a cardiac RN at the local hospital and he has many questions about the Democrat nationalized health care bill.

David wants to talk to his U.S. senators about his concerns. The problem is his senators are nowhere to be found. He has tried calling, emailing, sending faxes -- everything he can think of -- with no response other than form letters that don't answer his questions.

Since Jim Webb and Mark Warner were not holding any townhall events anywhere in the Commonwealth of Virginia, David decided to invest his own money and rent the auditorium at Riverheads High School in southern Augusta County and set it up so all the senators have to do is show up.

Invitations have been sent to Sen. Webb and Warner.

Friday morning David called Glenn Beck's conservative radio program to spread the news about his townhall meeting. He went on the air and explained his concerns and why he felt it necessary to go out on his own to set up a townhall meeting that may end up with the names of the senators on signs sitting on empty chairs.

But a townhall meeting ... with or without the senators ... gives local residents the opportunity to bring their concerns about nationalized health care to a public forum. This young man is moving forward in his quest to receive answers to his health care questions.

All Valley residents are encouraged to attend. Please bring your questions, support, or criticism.

This is the Valley's opportunity to have its voice heard.

Valley invites Virginia U.S. Senators Jim Webb and Mark Warner to a
Healthcare Town Hall Meeting!!
Sunday, September 6th in the Auditorium
Riverheads High school in Augusta County from 6-8 p.m.
Hosted by David Karaffa.
All Valley residents are encouraged to attend, please bring your questions, support or criticism.
This is the valley's opportunity to have its voice heard.

Come out and be heard!
Posted by Augusta Conservative at 8:45 AM No comments:

David Karaffa comes out for Bell.

David Karaffa, who worked to get Chris Saxman's seat, comes out for Bell.

Bell for Delegate by David Karaffa

Staunton City Councilman Richard “Dickie” Bell was selected at a public forum on Monday, July 27th to replace Delegate Chris Saxman as the Republican nominee for the 20th District House of Delegates seat. The 20th House District of Virginia encompasses a large majority of Augusta and Rockingham County, all of Highland County, and Staunton City. Bell has been a member of Staunton City Council since 1996 and is currently serving in his fourth term. He has also been a special education teacher of 13 years and coach at Riverheads High School. Bell holds a masters degree from Old Dominion University in Special Education and is a U.S. Navy veteran. Bell is married to Anne and has two adult children, Brian and Erin.

Councilman Bell joined six other candidates from the area at the forum to answer submitted questions and give the five-person Republican 20th Legislative District Committee a chance to compare the candidates for the nomination. At the forum, Bell stated that he would work to reform education, especially for special needs children. He also expressed his Pro-Life and Pro 2nd Amendment conservative values. In Councilman Bell’s closing statement he said, “I believe in you, the citizens of the 20th District. I believe in your spirit. I believe in your work ethic. I believe in your family values. I'm deeply honored that you'd even consider me for this important job, and I'm proud to be one of you.”

Did DNC Chair/aka Virginia Gov. sink the Dems for November?

Swac Girl Writes............
Democrat governor and DNC head Tim Kaine has probably sunk his Party for this fall's election in Virginia because, as head of the DNC, they have chosen to call people "mobs" [those attending townhall meetings].

It's the middle of August ... representatives are usually lucky to get 20 people to turn out for townhall meetings ... and here we are with people pouring out to townhalls because they want to know what this is about for them. ... People think the country is going broke and we ARE going broke. People's confidence in congressmen has nose-dived. The White House is pushing the "mob" issue to get away from the main issue -- health care.
Posted by Unknown at 11:12 PM No comments:

Over the past few weeks, you’ve no doubt seen the ample evidence that even core liberal Democrats don’t have much enthusiasm for their nominee for governor, Creigh Deeds. This lack of energy in his political base is a real problem for Deeds, and not surprisingly he’s begun taking steps to try to engender enthusiasm where lethargy now exists.

So last week the Teamsters Union pledged their “full support” of Deeds’ candidacy, and the Commonwealth welcomed President Obama for a political rally. Perhaps the most telling indicator, however, came Saturday in a call from Deeds to The Washington Post launching an attack against Bob McDonnell over his pro-life position.

Now, both candidates’ views on the issue of abortion are well known. As legislators, both have records they stand by on principle. Bob is pro-life and his record in this area is one of seeking and finding common ground, bringing together people with deeply held beliefs on things most Virginians can readily agree on, like banning the heinous procedure of partial birth abortion and ensuring that parents of minors in the Commonwealth have informed consent when a minor faces an unplanned pregnancy.

These policies enjoy broad support from Democrats and Republicans in the General Assembly but, as The Washington Post notes, Creigh Deeds opposes them. Tomorrow, he’ll be rewarded for his extreme positions with a rally sponsored by NARAL, which clearly hopes to spur liberal activists to start manning phone banks and walking neighborhoods for their nominee. And he has more events planned statewide.

Though both candidates’ positions on abortion are well known, in this campaign only Bob McDonnell has made known his policies for creating jobs, improving our schools and roads and making energy more affordable. In fact, on the same day Deeds is joining NARAL for a rally on abortion, Bob will be meeting with hard hit workers and small business owners in Martinsville to talk about his plans for creating jobs in every corner of our Commonwealth.

Just two weeks ago at the Virginia Bar Association debate, Creigh Deeds said “we need to be focused, it seems to me, not on the politics of division” but “on the things that will allow us to build the best economy, the most prosperity we can for everybody in Virginia.” And yet on Saturday, when Bob was delivering the Republican response to President Obama’s national radio address and talking about job creation, energy policy and education reforms, Deeds was calling The Washington Post and making a divisive attack on abortion in an effort to try and motivate his core base. It’s clear that he’d rather debate anything but the issues that are on the top of most Virginia voters’ minds right now.

Perhaps that’s because Creigh Deeds’ polices would destroy jobs in Virginia, while Bob McDonnell’s would create them. Perhaps it’s because Deeds has a 94% lifetime rating from big labor unions and has promised to make them a “partner” in governing Virginia, while Bob has a 91% rating from Virginia’s small business owners. Perhaps it’s because Deeds can’t come up with a funding plan for new and better roads and dances around the reality that he’s going to raise taxes if he gets elected, while Bob has a detailed plan to improve transportation without raising taxes. Or perhaps it’s because he’s having a hard time getting his supporters off their duffs, while Bob has thousands of energetic volunteers rallying friends and neighbors to his positive agenda for Virginia.

Whatever the reason, most people understand that Bob’s views on life are consistent with his faith and his belief that innocent life should be protected.

Most people also understand that Bob McDonnell is focused on the problems Virginians face in these difficult economic times and putting forward commons sense solutions to make things better.

And that Creigh Deeds is not.

Ed Gillespie
Campaign Chairman
Posted by Unknown at 12:07 AM No comments:

Creigh Deeds is refusing to answer any questions, even at an event he sponsored. He is afraid to take a stand on any issue apparently. Virginia needs a leader, not a Dodgin' Politician.
See the video over at Yankee Phil
Posted by Unknown at 11:38 PM No comments:

They were together in McLean. President Obama did it again. He is passing the buck. He says he didn't cause the mess.Maybe he should remember, the during the last 2 years of President Bush's term, he had a Democrat Congress. So I guess he should be telling Dems to SHUT UP.
See the video over at YankeePhil.
Posted by Unknown at 7:17 PM No comments:

Up by two touchdowns