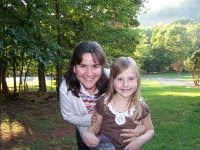 A Virginia woman who gave birth to a young girl is now in a court battle with her former lesbian "spouse". Questions arise out of conflicting state laws. Do the laws of Virginia trump those of Vermont? Does little Isabella actually have 2 mommies? See more over at YankeePhil

Posted by Unknown at 2:15 PM No comments:

PolitFact's Truth-O-Meter is Biased Too...

Mark Warner, in his form response to those who write him opposing the healthcare bill, also references the 'unbiased' site: Politfact, a project of the St. Petersburg Times.

Here is Evidence [click to read] that PolitFact is not exactly 'neutral.' In fact, PolitFact is here documented to have covered for ACORN and attempting to discredit Michele Bachmann.
Posted by Bob K. at 11:02 AM No comments:

Recently Mark Warner sent me a form letter about Obamacare referencing the website FactCheck.org to discredit Conservative concerns. He said voters should look to such 'unbiased' sources because their are so many 'false statements' about the legislation. But follow the trail below to find out just how fair and balanced FactCheck.org really is.

The ANNENBERG Public Policy Center at the University of Pennsylvaniais the organization behind the FactCheck.org website that is being referenced by voters and media personalities alike to help them form opinions on the “truthfulness” of the claims being made by political ads as well as statements made on the Campaign Trail.

Kathleen Hall Jamieson, Ph.D. is the Director of the ANNENBERG Public Policy Center at the University of Pennsylvania which is the organization BEHIND the FactCheck.org “truthfulness” website.Dr. Jamieson's newest book entitled “Echo Chamber: Rush Limbaugh and the Conservative Media Establishment” is a MAJOR HIT PIECE against the Conservative voices in the media on television, radio, and in print. View the book’s Table of Contents [click to read]. Then decide for yourself.

What’s the bottom line? FactCheck.org is a LEFT-BIASED organization that has sold itself as “Politically NEUTRAL” to America’s voters and media personnel. The fact is, the ANNENBERG Public Policy Center (APPC), the sponsoring agency behind FactCheck.org, is itself supported by the same foundation, the ANNENBERG FOUNDATION, that Bill Ayers secured the 49.2million dollars from to create the Chicago ANNENBERG Challenge“philanthropic” organization in which Barack Obama was the founding Chairman of the Board for and Ayers served as the grant writer of and co-Chair of for its two operating arms. Hardly an 'unbiased' source. Source: Free Republic
Posted by Bob K. at 11:47 AM No comments: 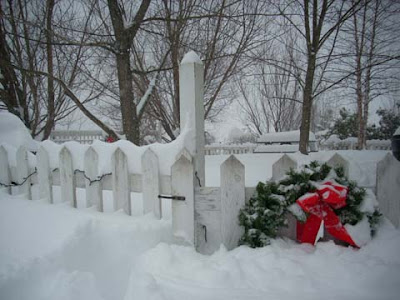 The picket fence and gate are almost covered with snow. Photo by SWAC Daughter. 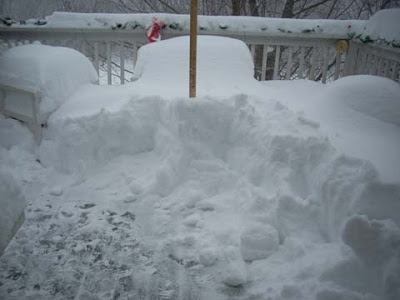 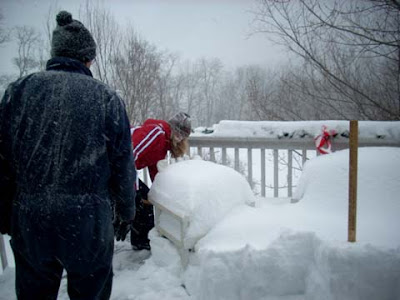 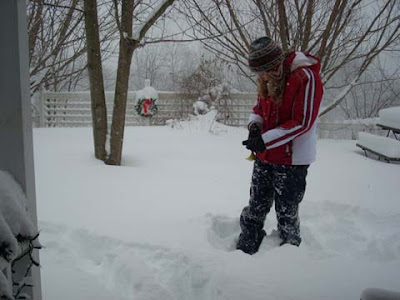 The snow is knee deep. 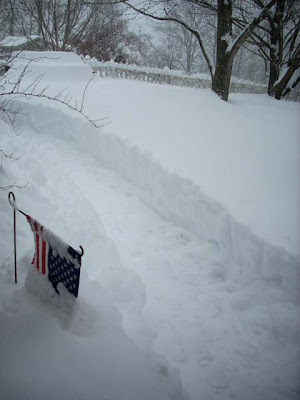 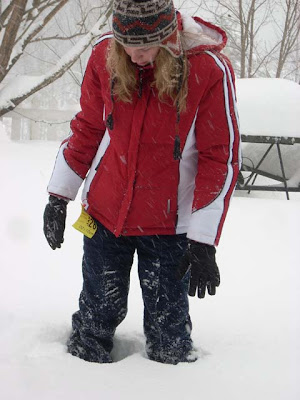 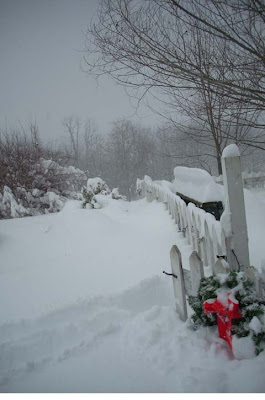 As this photo was taken, heavy snow continued to fall. Photo by SWAC Daughter. 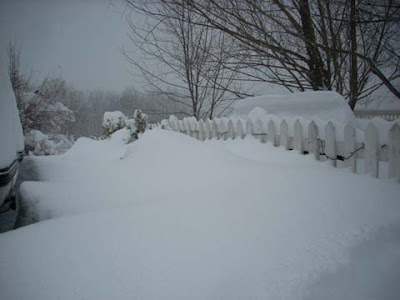 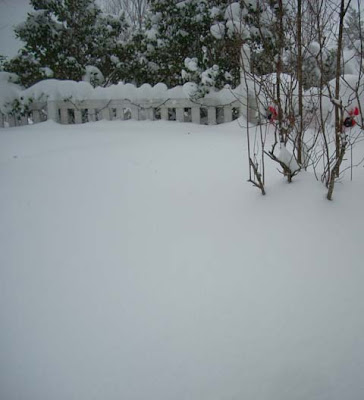 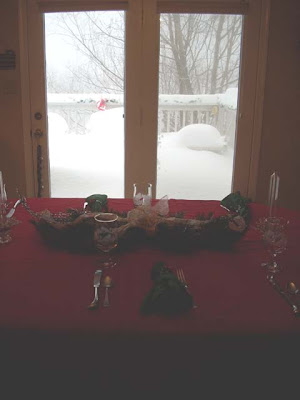 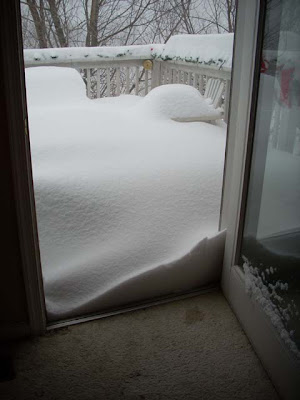 Snow piled against door to deck. 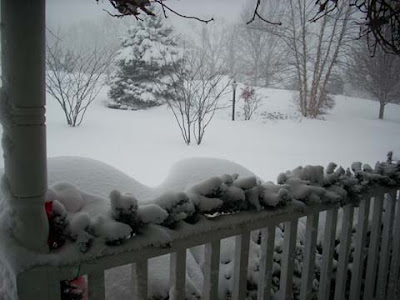 Yard is a winter wonderland. 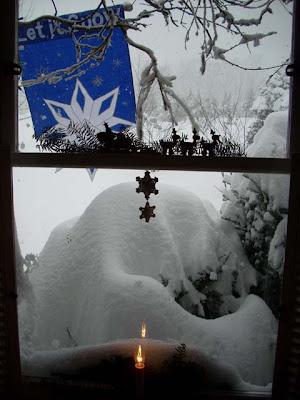 Bob at The Journey has been out taking photos this morning ... and so has Fishersville Mike, whose bench is now completely buried in snow. No morning reports in yet from Yankee Phil or Jason or David.

Mike reminds us of those working throughout the storm, people we are thankful for ... and that includes SWAC bloggers Jason who is a deputy, and David who is a cardiac RN at the local hospital.

It's 23 degrees and the snow continues to fall....

Update:
- Phil has photos of the "big blast of global warming"
- David has photos and says they are "completely snowed in"
- Mike has updated at 11:15 Saturday morning

The baby was under bedding and had been suffocated by her mother. Investigators say because the mother and baby were still connected by the umbilical cord and placenta, state law does not consider the baby to be a separate life. It is a legal abortion, apparently. Therefore, the mother cannot be charged.
Republican State Senator Steve Newman announced today that the Division of Legislative Services has begun drafting legislation to ensure that a life cannot be legally taken after a child is born not withstanding its connection to the umbilical cord. 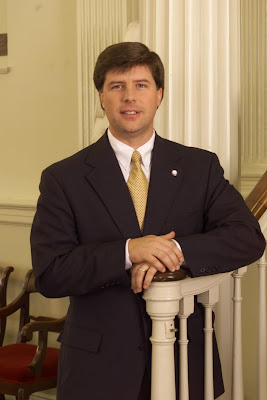 The bill will amend Section 18.2 of the Code of Virginia which is the criminal code. Newman stated, “It is difficult to believe that the current Code could have such a flaw that would allow anyone to take the life of a born child. While I will not comment at this time on the case in Campbell County, it is abundantly clear that Virginians will demand a legislative cure to this loophole. I have consulted with the Attorney General Elect, Ken Cuccinelli; Campbell County Commonwealth Attorney, Neil Vener; Campbell County Sheriff Terry Gaddy and the investigator in the case, Tracy Emerson. All have indicated their full support for this legislation.

See the video at Yankee Phil

Posted by Unknown at 3:37 PM No comments:

Some of Us Had 'Joe Wilson' Moments

Getting the Attention of Public Servants...

...Can Be Extremely Frustrating!

But dissing a grandmother is really bad form!
Posted by Bob K. at 5:01 PM No comments: 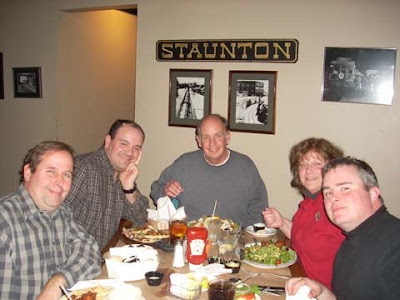 SWAC Area Bloggers, aka StrictlyVA bloggers met last night at the Depot Grille.
From Left to right are Fishersville Mike, Augusta Watercooler, The Journey, Swacgirl, and Yankee Phil. Augusta Conservative missed the shindig.
See more at Swacgirl.
Go see Bill with his Rabbit
Posted by Unknown at 2:54 PM No comments:

The Return of the Rest Areas

Governor McDonnell is Bringing Them Back!

An open rest area near Crozet.

My one question... how much money was actually "saved" as skilled crews removed signs, boarded up the buildings, striped a solid line across the deceleration lane, posted "no parking" signs, installed gates, winterized plumbing and removed fixtures?
Posted by Bob K. at 8:46 AM No comments:

Virginia highway rest stops shuttered to save money in the economic recession will reopen within 90 days after the January start of Gov.-elect Robert F. McDonnell’s term in office
Posted by Unknown at 12:27 AM No comments:

They have brand new models
but they still just suck.
I meant Liberal Democrats, not Vacuums
Electrolux has always been a great brand 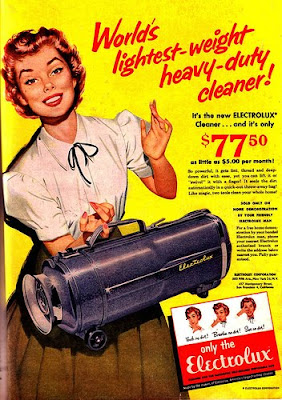 A funny video of Jon Stewart can be seen over at Yankee Phil.
It shows Mark Warner doing his impersonation of an Electrolux 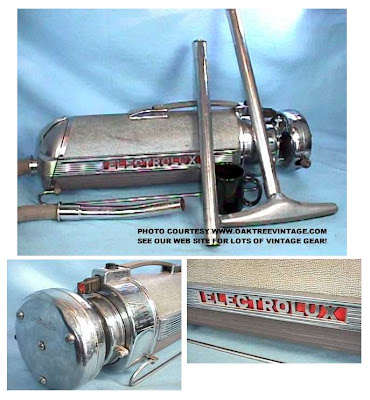 Our two Senators were conspicuously absent during the healtcare debate earlier this year.

Once again our Senators need to hear from you! You need to remind them that we in Virginia do NOT want this life-denying tax increasing job killing monstrosity. Please vote NO!

The Fall of the Church of Gore

Refusing to be swayed by "facts," Sticking to your beliefs even when all evidence points to their unreasonableness, it's a matter of faith after all... am I describing the "dangerous" [1.] Religious Right here? No, these are the characteristics of the modern Global Warming movement, of which Algore is head priest and prophet.

As the hacked emails make it ever clearer, he is a false prophet... the kind the Biblical Jeremiah condemned outright.

I'm doing my little bit too with my Virginia Photo Album.
Posted by Bob K. at 9:20 AM No comments:

In Honor of 'ClimateGate'

It was minus two outside this window.

A family inspects icicles on the Blue Ridge Parkway.

As bitter cold gripped the commonwealth, Obama's transition team wondered what to do with the planned 'global warming' speeches.

All Images by Bob Kirchman. None Photoshopped.
Posted by Bob K. at 4:50 PM No comments:

In Honor of 'ClimateGate'