How to cheat Virginia voters

Public Policy Polling's latest effort in Virginia has Obama up by two points.
In an electorate that's plus-five Democratic.
Their number voting for Obama - 49 percent.
Number who approve of Obama's job performance - 45 percent.
Number who have a favorable opinion of Obama - 48 percent, compared to 49 favorable for Romney.
So a few people don't like him, don't like the job he's doing, but will vote for him anyway.
Okay.
Posted by Mike at 2:38 PM No comments:

Legal Insurrection features a Virginia car this morning.
Paul Ryan does the math because Obama can't.
Can we go there?
Yes we can.
Posted by Mike at 7:49 AM No comments:

Rasmussen Reports has Mitt Romney taking a one-point lead in Virginia with a poll taken Thursday.
That's with 10,000 or more Romney fans at Fishersville - not getting calls on an overloading system. Rep. Bob Goodlatte was too busy introducing the rally to be asked a poll question. 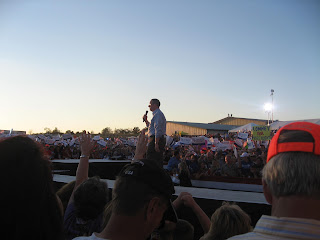